You are using a web browser that may not support the design features on this site.

For the best experience, please switch to another browser. We recommend Chrome or Firefox.

Get to Know Us

Our outstanding team is ready to provide you with outstanding dental care. Learn more about us here!

We’re pleased to offer all the essential services your family needs to enjoy excellent oral health.

We love what we do, and it shows! Read testimonials from some of our satisfied patients, then see for yourself!

Check out our spacious, state-of-the-art office, complete with our own in-house dental lab!

Real or Fantasy? The Origin Story of the Beloved Tooth Fairy 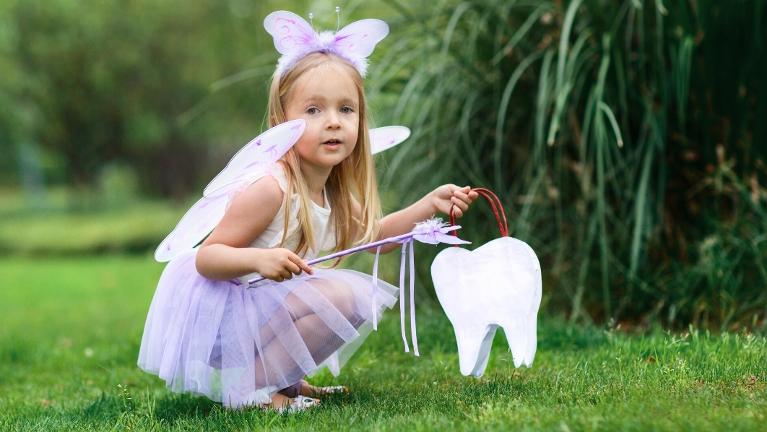 August 22nd, 2021 is National Tooth Fairy Day! If you’ve ever wondered who on earth is responsible for creating one of the most whimsical, cheery fables, look no further! We’ve compiled everything we know about the origins of the universally adored Tooth Fairy. Most of our mystical, gift-giving, fantasy icons originated with some nugget of truth. Santa Claus can be traced back to St. Nicholas. The Easter Bunny is derived from a German fable involving an egg-laying hare. Does the iconic Tooth Fairy have a similarly benevolent origin story? Read to learn more!

The Tooth Fairy can be traced back to a very real, printed idea in 1908. In her Chicago Daily Tribune article entitled “Household Hints,” author Lillian Brown encouraged parents to leave five cents under their child’s pillow in exchange for the tooth, in order to make children more comfortable with the idea of losing baby teeth.

In 1927, Esther Watkins Arnold solidified the concept with her imaginative short children’s play titled, ‘The Tooth Fairy.’ Afterwards, the Tooth Fairy became a household concept, bringing joy and solace to children who lost their teeth.

The Origin Story of the Tooth Fairy: Europe

Before the Tooth Fairy made literal headlines, the idea of stowing away beneath a pillow and stealing(?) teeth belonged to a prolific French children’s author. It is speculated that the pillow aspect of the legend began with 17th-century author Madame d’Aulnoy’s fairy tale, The Good Little Mouse (La Bonne Petit Souris). The story is about a fairy who turns into a mouse in order to hide beneath a king’s pillow to steal his teeth while he sleeps.

Compensation for Lost Teeth: “Eddas” and the Norse

The concept of paying children for their teeth goes back even further than Madame d’Aulnoy. The “Eddas,” the earliest recorded writing of Norse and Eastern European traditions, indicated that parents would give their children a small amount of money when they lost their first baby tooth.

This tradition stemmed from a deep superstition regarding the lore surrounding children’s teeth, which were thought to bring good luck. It was even common for Norse warriors to adorn necklaces with these teeth for protection during battle.

Before the pillow and the payment, ancient civilizations had rituals surrounding the loss of teeth. In medieval Europe, it was highly encouraged to either toss baby teeth in the fire or bury the tooth. Without these precautionary disposals, a witch might find the tooth and use it against the child.

What Makes the Tooth Fairy Unique?

Apart from the entire concept of a magical creature exchanging teeth for money, the Tooth Fairy is a bit of a mythical phenomenon because it is one of the only fables where the main character does not have a familiar visage. Santa Claus has a big belly, red coat, and white beard. The Easter Bunny is a rabbit. The Tooth Fairy…has wings? Has a wand? Is a woman? Is big? Small? Who does the Tooth Fairy work for?

While the Tooth Fairy does not have an exact appearance, modern literature typically describes the magic benefactor as a woman with wings. And lots of glitter.

The team at Oak Family Dental has combined decades of experience giving children the caring, gentle dental attention they need! We know the dentist’s office can seem scary, but we want to be the fun, friendly equivalent of the Tooth Fairy! For all of your child’s dentistry needs, visit your Metairie dentist, Oak Family Dental!